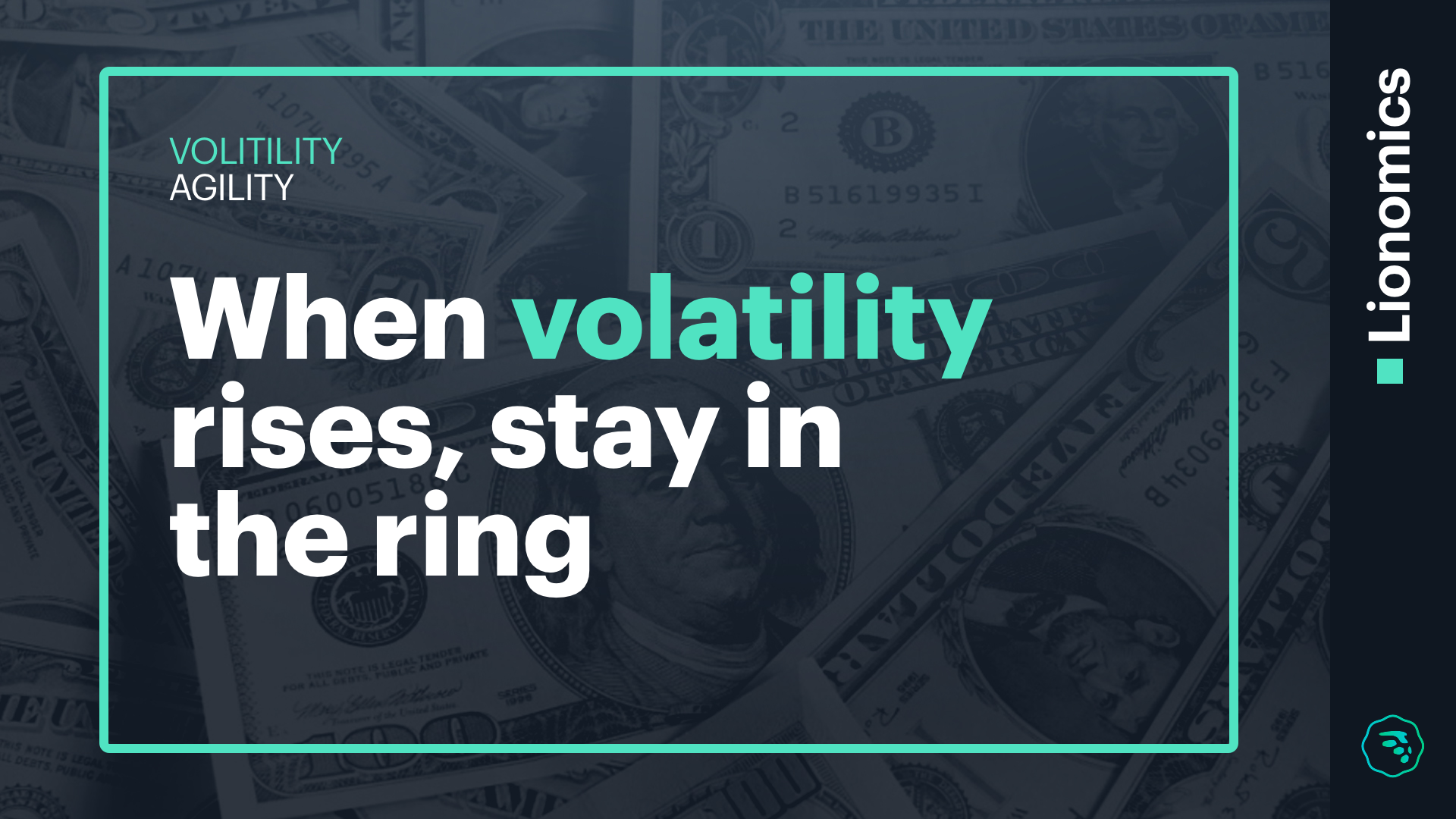 When volatility rises, stay in the ring

Perhaps the best quote to capture the essence of maintaining composure in volatile markets is one from boxer Mike Tyson: "Everyone has a plan until they get punched in the face." Well, with the S&P 500 Index tumbling -4.1% last week (week ending 10/12/18), many investors may feel a bit roughed up. Volatility increased with swings in both directions: Stocks fell -5.3% over two days, representing the worst decline since February, before rebounding 1.4% on Friday, the best day since April.

Volatility like this can be unsettling, but it’s normal, and we’ll explain why in today’s Lionomics post. Last week’s volatility had a number of potentially contributing factors, including:

And while many investors will obsess over where the market will go from here, it’s more important that they don’t lose sight of their financial plans. Basically, don’t let the occasional “punch in the face” (or the fear of one) derail you from staying in the ring and winning the fight.

The beauty of long-term investing is that the specifics of any market episode matter less than maintaining a steady overall course in a balanced portfolio. Thus, there are two important takeaways from this latest market episode (i.e., last week’s volatility).

First, stock market volatility is not only normal, it’s also healthy. Short-term declines of 5% are par for the course when investing in stocks and should generally not alarm you as an investor. If the economy and corporate fundamentals remain healthy, stocks can still do well in the long run.

Second, on some level, there are always reasons to be concerned, a condition we often refer to as the "wall of worry." Over the past nine years, the wall of worry has consisted of:

The wall of worry has also included Grexit, Brexit, Russia, China, trade wars, tech stocks, and other events too!

The goal of any long-term investor with a financial plan isn’t to jump in and out of the markets to avoid a few swings like these. Instead, it’s to maintain a portfolio that can withstand a few occasional punches.

Let the data reassure you when volatility rises
With volatility currently rising, here are some facts and figures that can help you stay focused on long-term trends.

The U.S. market declined by about -4% last week, the biggest bout of volatility since February. In general, the market has been climbing the wall of worry since 2016, as shown in the chart above. The left axis represents the value of the S&P 500, so you can see how it has mainly risen (with a few occasional drops) since January 2016. Strong corporate earnings growth seems to have helped, as have tax cuts and a healthy economic backdrop.

While the recent market decline may appear large in the context of the preceding market calm, it’s important to keep in mind that the stock market is inherently volatile, as seen in the next chart.

Chart 2. Today’s level of volatility is normal and healthy

Battling our own natural tendency to want to time the market (i.e., jump in and out based on performance) is one of the challenges of investing. When markets get choppy, many investors are tempted to abandon ship. This is especially true today because the relative market calm of the past two years may have left some investors unprepared for rising volatility (they weren’t anticipating last week’s proverbial punch in the face).

Trying to time the markets is a bad idea

This chart shows each year’s stock market return percentage (bars) compared to the worst pullback (decline) percentage during the year (dots). In 2017, the worst pullback was less than 3%, the lowest since 1995. Such a low level of volatility is highly unusual because almost every single year experiences a market pullback of at least 5%. The average intra-year decline since World War II comes in at -13.4%. Thus, this year’s largest decline of -10% is fairly typical.

What’s more important is the fact that most years end in positive territory even if they face significant declines intra-year, a key reason why trying to time the markets is a bad idea. This is why investors can often be their own worst enemies since their natural tendency may be to sell when things are already at their worst. Thus, it’s important to focus on long-term trends rather than daily market moves.

A balanced portfolio is still the best way to navigate volatility

Rather than worry about each individual market move, long-term investors can construct balanced portfolios that weather market volatility and are intended to emerge triumphant in the long run.

Typically, if we look at the performance of major asset classes each year, a balanced portfolio of an approximately 60/40 stock/bond allocation has delivered the steadiest performance through good markets and bad. It’s never been the best or the worst performer, and this is by design! It allows clients (and advisors) to sleep at night without sacrificing solid returns.

Looking at asset class performance also provides evidence that market timing is difficult, if not impossible. The best-performing asset class one year can easily be the worst in the next. A balanced, diversified portfolio naturally smooths over these wide variations.

Dodge the punches and emerge a winner

What’s the bottom line? Some investors may feel unprepared for volatility after two years of relative market calm, but today’s volatility isn’t as bad as it feels. In fact, it’s normal in the grand scheme of things. Maintaining your investment discipline, sticking with a balanced portfolio, and focusing on long-term trends are still the best ways to maintain composure in volatile markets.